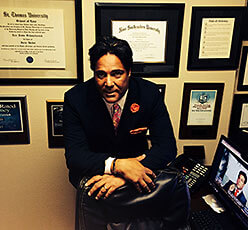 Mr. Schwartzreich has argued many Stand Your Ground Motions throughout the State of Florida and has lectured on the topic at the Broward Bench and Bar Conference, a conference for lawyers and judges.

Mr. Schwartzreich represents members of several law enforcement unions, the Police Benevolent Association, the International Union of Police Associations, and the Broward Sheriff's Office Deputies Association. Eric represents many police officers through the internal administrative process within the police agencies they work for and when charged in criminal court.

Mr. Schwartzreich and his firm have been featured on Dateline, 48 Hours, Fox Business News Network on the Neil Cavuto Show, Fox Headline News, CNN, MCNBC, and other national news networks. Eric's cases are covered by local and national media outlets and newspapers. Mr. Schwartzreich has been quoted in articles in the ABA Journal, the Daily Business Review, Miami Herald, Sun Sentinel, Orlando Sentinel, Palm Beach Post and other newspapers and periodicals throughout the country and worldwide. Eric continues to be a legal commentator on national news talk shows and is frequently asked to comment on local legal news stories on television and print media.

Mr. Schwartzreich has successfully advocated before the Florida Legislature as well as to local city and county commissions for the firm's clients and for the rights of citizens. He has also testified before the Senate Appropriations Committee in Tallahassee, Florida.

Eric's passion for the law and the legal system bought him to the American Heritage High School Law Program, in Plantation, Florida, where he has been coaching a high school mock trial team for many years. His students have won over ten (10) Broward County Mock Trial competitions, five (5) State Championships, and three (3) titles in the prestigious Empire Mock Trial Competition, in both New York City and San Francisco, against the best teams in the U.S. and international teams.

In 2019, the Florida Law Related Education Association presented Eric with the Ed Lange Award for his commitment to legal studies and dedication to teaching professionalism, legal skill, and knowhow to his students.

Mr. Schwartzreich's past and current community involvement include the Fort Lauderdale Beach Rotary Club. He was previously appointed to the Human Rights Board by then Broward County Commissioner Lori Parrish. He was appointed by former Councilwoman Sharon Uria of Plantation to serve as an alternate on the City of Plantation's Zoning Board.

Eric is married to attorney Mila Schwartzreich and they have two children.